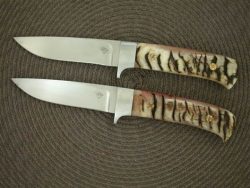 My love for knives began when my Grandpa, George Washington Hendrix gave me a Winchester knife When I was about five years old. The knife had Christmas tree handles and he had broke the tip off so I Would not stick myself with it. I spent a lot of time on my Gradpa’s farm while my dad was in the navy. I would often watch him sit in front of a pot belly wood stove at night and sharpen his four blade congress Pattern John Primble knife. In 1957 I was given Grandpa’s knife and still have it today. While growing up I had purchased several hunting knives made by Puma and Buck. In 1964 I was asked to go to the Piedmont Jockey Lot which was a very early flea market. Old timers were sitting around a large buck stove trading knives. I became very interested in old knives and the history of old knives. Over the next eight years I traded and purchased case and other collectable knives and collected Remington knives. In 1973 I sold my collection of Remington knives at local gun and knife show and while at the show met Harold Corby and purchased one of his knives that was featured in a knife publication. I found the whole idea of making a knife very interesting. I located a company that sold Square Wheel Grinders and purchased one and began A long relationship with knife making.